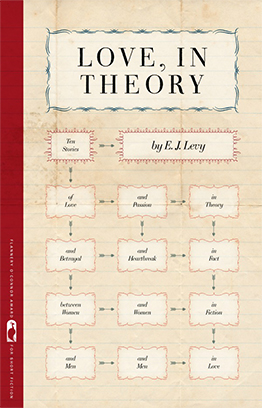 Winner: 2014 GLCA New Writers Award for Fiction
Named: A Best Indie Book of 2013 by Kirkus
Winner: 2012 Flannery O’Connor Award
Winner: 2012 ForeWord Book of the Year AwardIn this funny, brainy, thoroughly engaging debut collection, an award-winning writer looks at romance through the lens of scholarly theories to illuminate love in the information age.In ten captivating and tender stories, E. J. Levy takes readers through the surprisingly erotic terrain of the intellect, offering a smart and modern take on the age-old theme of love–whether between a man and woman, a man and a man, a woman and a woman, or a mother and a child–drawing readers into tales of passion, adultery, and heartbreak. A disheartened English professor’s life changes when she goes rock climbing and falls for an outdoorsman. A gay oncologist attending his sister’s second wedding ponders dark matter in the universe and the ties that bind us. Three psychiatric patients, each convinced that he is Christ, give rise to a love affair in a small Minnesota town. A Brooklyn woman is thrown out of an ashram for choosing earthly love over enlightenment. A lesbian student of film learns theories of dramatic action the hard way–by falling for a married male professor. Incorporating theories from physics to film to philosophy, from Rational Choice to Thorstein Veblen’s Theory of the Leisure Class, these stories movingly explore the heart and mind–shooting cupid’s arrow toward a target that may never be reached.

“A smart, insightful collection of stories about life and love.”
–Kirkus, Starred Review“A master of [the] form….”

“A brilliant debut…Sad, funny, and always wise…I’ll be returning to these wonderful stories again and again.”
–Cheryl Strayed, author of Wild

“This debut collection . . . is wholly beguiling and authoritative, an instruction from first page to last. E. J. Levy has a noticing eye, an epigrammatic way of describing the world, and what she looks at is both freshly seen and shown. Love, in Theory is a practical manual for beginners at and adepts of love, for young and old, for the unrequited and faithful and faithless―which is to say, for us all.”
– Nicholas Delbanco, author of Lastingness: The Art of Old Age

“Selfishness has never been sent up as mordantly as it is in E. J. Levy’s debut collection of stories.”
– Andrew Holleran, author of Grief

“Love, In Theory is a collection richly worthy of Flannery O’Connor’s name.”
–Robert Olen Butler, author of A Good Scent from a Strange Mountain

“In all the stories in Love, In Theory, you can see Levy’s careful writing. There is rarely a word out of place, and each story offers a new meditation, if you will, on the nautre of love without giving in to cliché. This is a smart, smart book.”
– Roxane Gay, I Have Become Accustomed to Rejection blog